They Are Coming For Your Vape 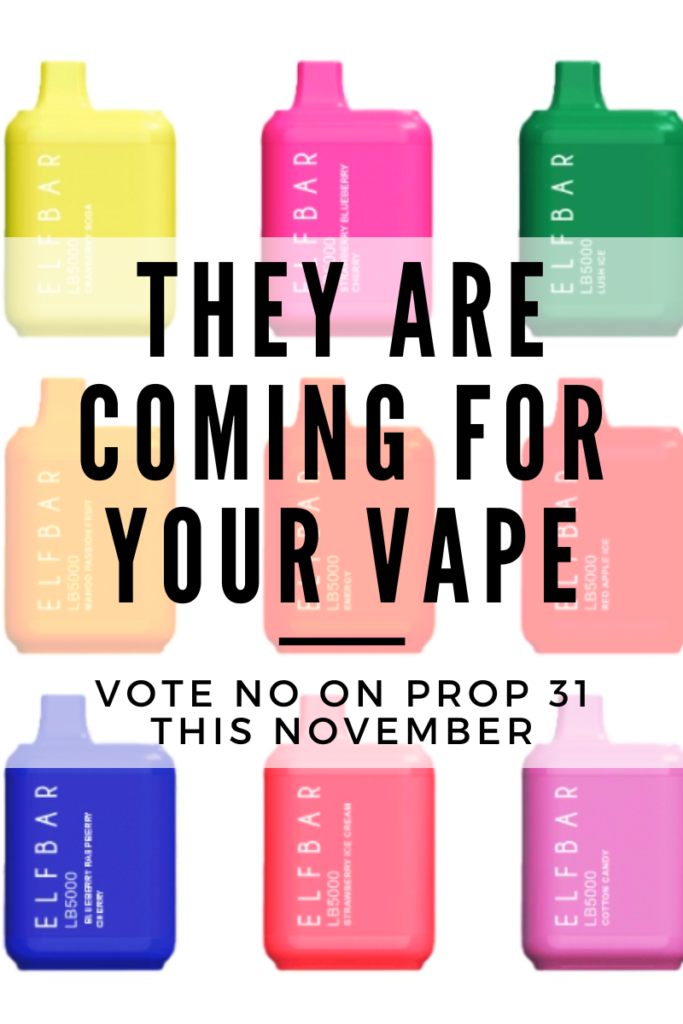 Love your Aloe Grape, Cool Mint, Watermelon Iced, or Sour Apple? Come November, if California Proposition 31 – the Flavored Tobacco Products Ban Referendum passes, you’ll be able to buy flavored vodka, but your favorite flavored nicotine will be banned. It is certainly a mind-blowing idea that adults aged 21and over, will have their freedom of choice for a flavor of nicotine revoked. But that’s only the beginning.

The collateral damage of banning flavored nicotine – the #1 choice of adults who vape – is the complete annihilation of the vape industry as we know it in California.  As you may well know, Governor Newsom has waged war on our right to vape. Last year, he signed Senate Bill 793 that banned all flavored nicotine products (with exceptions for hookah tobacco, loose leaf tobacco, and premium cigars.)

The vaping industry responded by gathering 1.1MM signatures to contest the legislation and forcing it to the November statewide ballot for California voters to decide. If Prop 31 passes, we will no longer be able to sell flavored nicotine products.

What Published Medical Studies Say About The Dangers of Vaping

Since the Vacaville Vaporium opened in 2014, we have been committed to educating and converting thousands of former smokers to a much less harmful alternative (95% less harmful according to Public Health England studies). We have posted and shared scientific essays published in the American Journal of Public Health that examine the controversy surrounding the benefit-risk analysis of vaping.

Over the years, we have joined in countless battles in the fight against unjust laws, regulations, ordinances and propaganda restricting a powerful harm-reduction tool for so many adults addicted to combustible cigarettes. The ban on flavored nicotine, SB 793, not only unfairly targets the vaping industry, will do little to protect children, but will hurt our small businesses.

A BAN ON VAPING IS AN UNFAIR APPLICATION OF THE LAW

The California Coalition for Fairness, the leading campaign opposing the ban published the following sensible reasons for voting ‘NO’ on Prop 31:

“We agree that youth should never have access to any tobacco products, but this can be achieved without imposing a total prohibition on products that millions of adults choose to use. This law goes too far and is unfair, particularly since lawmakers have exempted hookah, expensive cigars and flavored pipe tobacco from the prohibition. Moreover, a prohibition will hurt small, local businesses and jobs as products are pushed from licensed, conscientious retailers to an underground market, leading to increased youth access, crime and other social or criminal justice concerns for many California residents.”

An August 2022 editorial article in the OC Register brought up an interesting point about the validity of the proposed law:

“Although the law bans the sale of flavored tobacco products to all customers regardless of age, lawmakers named it the “Stop Tobacco Access to Kids Enforcement Act.” They claimed it was needed to stop underage tobacco use — because only kids, apparently, like flavor. To be sure, no one wants children smoking or vaping, but it’s already illegal in California to sell or give tobacco and vapor products to anyone under the age of 21. If prohibition worked, then we wouldn’t have a problem.”

WHAT CAN YOU DO TO PROTECT YOUR RIGHTS?

We are asking for your help. Please explain to everyone that loves you that a vote for “No on Prop 31” would mean protecting your right to vape and your freedom of choice. Please educate your friends, family, neighbors and explain how vaping has helped you.

As you may already know, studies show that Vaping is at least 95% less harmful than traditional tobacco smoke. So why do they hate us? Watch the Youtube video that explains the the issue:

Truth About Vaping Episode 1 Why They Hate Us – YouTube

This November, get out and vote like your life depends on it, because it literally does.