Why You Need CBDa In Your Medicine Cabinet Right Now 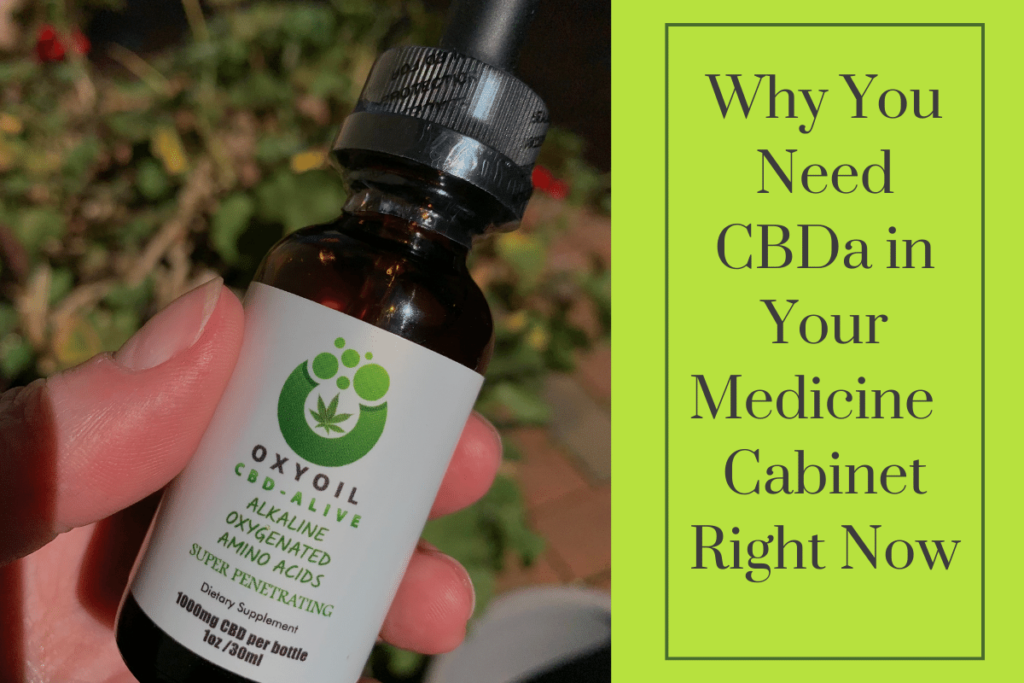 By now you have likely heard of hemp-derived CBD, the major non-psychoactive cannabinoid in cannabis. Hemp-derived CBD is not the same as marijuana and is sourced from industrial hemp plants which are grown for their seeds and fiber. Because of its powerful antioxidant and anti-inflammatory benefits, CBD has been researched for its therapeutic potential, and currently there is published research that supports its benefits in the treatment of  epilepsy, inflammation, anxiety disorders, diabetes and a number of other common physical and neuropsychiatric conditions. CBD has been studied for its promising anticancer properties. What you may not have heard of is a relatively new commercially available hemp-based product that is 1000 times stronger than CBD. Meet the cannabis superhero, CBDa.

What is cannabidiolic acid (CBDa)?

CBDa is one of an estimated 113 compounds called  cannabinoids found in the cannabis plant. Cannabinoids can affect the endocan CBDa is actually a precursor of CBD prior to a process called decarboxylation which removes the acid through a heating process.

Most scientific research has been focused on the pharmacological traits of the two famous cannabinoids – the psychoactive compound found in marijuana called delta-9-tetrahydrocannabinol (THC) and cannabidiol (CBD), the non-psychoactive compound. Not until 2008 did scientists discover that the more raw form of CBDa held some very remarkable therapeutic benefits. They discovered that CDBa had a similar structure to common non-steroidal anti-inflammatory pain medications like acetaminophen and ibuprofen. CBDa inhibits COX-2, the same chemical found in the body that is inhibited by these common painkillers.

Research studies have noted that “agents that would inhibit COX-2 while sparing COX-1 represent an attractive therapeutic development and could represent a major advance in the treatment of rheumatoid arthritis and osteoarthritis, as well as a diverse array of other conditions” which has sparked great interest in  CBDa for  treatment of these conditions. CDBa is a very promising plant-based medicine for inflammation and pain, but researchers are finding that there are more therapeutic benefits than previously known.

Anxiety & Sleep Dysfunction: In 2020, a published research study in the medical journal Molecules, found that CBDA interacts with the 5-HT1A serotonin receptors. The 5-HT1A pathways control many different functions in the brain including nausea, sleep, aggression, mood, and cognitive functions.  CBDA works on the 5-HT receptors in much the same way as a selective serotonin reuptake inhibitor (SSRI) antidepressant medication would, making it a promising therapy for depression, anxiety, and sleep disorders.

Breast Cancer: There is much published research that suggests that CBDa may have a beneficial role in treatments for a highly aggressive type of breast cancer called MDA-MB-231.  Researchers published a study in the Journal of Natural Medicine in January 2017 that examined the bioactivity of CBDa and breast cancer cells. The abstract stated: We previously identified CBDA as an inhibitor of the migration of MDA-MB-231 cells, a widely used human breast cancer cell line in cancer biology, due to its highly aggressive nature.

COVID-19 Variants: A research study by Oregon State University was conducted to examine the ability of the acidic cannabinoid precursors cannabigerolic acid (CBGA) and cannabidiolic acid (CBDA) to block the activity of the SARS-CoV-2 virus in the human body. The report published in January 2022 in the Journal of Natural Medicine found that “cannabigerolic acid and cannabidiolic acid were equally effective against the SARS-CoV-2 alpha variant B.1.1.7 and the beta variant B.1.351.” What that means is that CBDa in a laboratory setting was found to block the COVID-19 variants from entering healthy cells.

While the lone study does not prove that cannabinoids offer a better value than existing treatments for COVID, and by no means a substitute, the findings drew attention to the powerful therapeutic properties of CBDa. The study sparked serious interest in further researching CBDa as a serious target for a COVID treatment research in the future.

Patent-Pending Treatments: A British company, GW Pharmaceuticals manufactures the first pharmaceutical-grade CBD oil Epidiolex approved by the US Food and Drug Administration for treating epileptic seizures. While conducting their research they also studied CDBa and found the compound more effective seizure treatment. GW Pharmaceuticals has also filed two other CBDa medical-use patents: one for inflammatory skin diseases and the other for cancer treatment.

How Should CBDa Be Taken? Since CBDa cannot be heated, vaping or smoking CBDa is not an option. However, tinctures and gummies are available for ingesting CBDa and are best for helping with anxiety, sleep regulation, and nausea. Topical creams and rubs are best for pain relief.

Where Can I Purchase CBDa? The Vacaville Vaporium offers the largest selection of certified high-quality CBDa products available in a variety of forms like tinctures, energy drinks, topical lotions and gummies. We also carry options for pets. Stop into the Vaporium to discover which product is right for you.

Why You Need CBDa In Your Medicine Cabinet Right Now

By now you have likely heard of hemp-derived CBD, the major non-psychoactive cannabinoid in cannabis. Hemp-derived CBD is not the same as marijuana and is

The Secret Guide to CBD